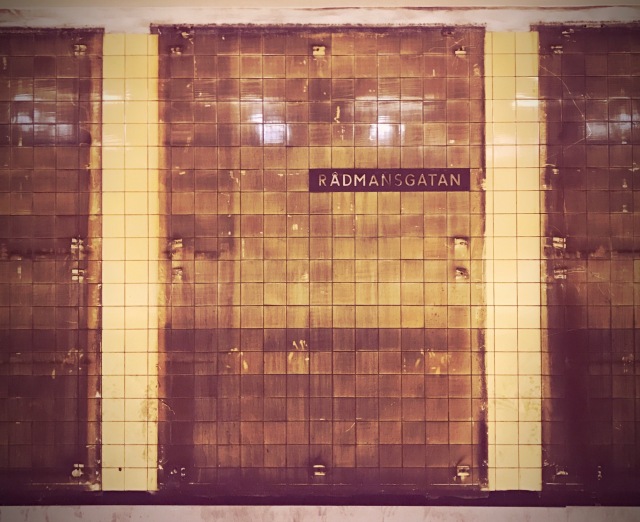 It was quite awhile ago since I posted any photos. At the same time, I’m having a little project at my Facebook-page with “One Image a week”. So I thought about this brilliant idea to use the at both my Facebook page, and here. 🙂

This photo was taken at lunch time this Saturday. I spent the weekend in Vemdalen, a ski resort in Sweden, and the wind during these days were hard, to say the least. This is taken at the top with an iPhone 5S.

What I enjoyed with the scene was the contrast between the wind and the sunny sky, at the same time as the snow passed by, creating those small white dots that almost looked like stars.

While you’re at it; do you see the face in the clouds?

Olloclip has just released a new 3-in-1 Macro Lens. For those of you who have read this blog before, you know that I’ve tested those lenses before (search on Olloclip in the search field for more information), and I really like the result. I’ve ordered one of those to get a better view on it in reality, and I’ll get back with some reviews after getting my hands on them.

This is quite traditional filter-app The difference between this and most of the current filter-apps may be that there are fewer filters to use, and filters that are the opposite of subtle.

I’m not the biggest fan of using filters, but when I use them I want to use them in a way that it really shows that filter’s been used. With that said, this app contains some really nice ones, if you like to use filters.

If you download the free app you’ll have to live with some ads, but I don’t think that they are too annoying.

The test photo is a photo I took with my iPhone 5. Below it, you’ll find the same photo after the Vintage app is used, and at the bottom you’ll find two screen shots.

This is a really good beginners tutorial of the basics in photography and fits well if you’re interested in photography, and want to improve your photos to the next level.

Yesterday I were in Norrtälje, together with some friends. On our way there, we walked along this road, and this view, with the trees that’s preparing themselves for Winter, the road and the small typical Swedish houses was amazing. Really looking forward to best time of the year when it comes to photography, the autumn.

On top of the photo I’ve added some filters, and then added the “painting like” effect.

Some thoughts about iOS7 after using it for one month

Since we’re developing apps for iOS I’m part of the beta testing team that will use their coming upgrades before they are released, and report issues back to Apple, to have them corrected.

(See also – One of the best new features in iOS7 – a well kept secret?)

This new upgrade is both a big upgrade, at the same time as it’s not. It’s big in terms of GUI, the icons are “flat” now instead of “floating”/3D. I really don’t know if I like this more than the old one. I’ve got used to it, but at the same time I miss some of the old beautiful icons. It’s a small change in the overall usage.

One new feature is the possibility to have more than one screen in each icon-folder, but at the same time there are fewer icons in every screen. Both good and bad there as well.

The camera has been upgraded and I think it has gotten better with live filters, easier access to functions and some new nice features as “square” for all instagrammers (my nick is btw on instagram is @pedrohansson).

What I thought for almost 24 hours was a big flaw in this new OS, was that I couldn’t reach spotlight to the left of my home screen. With over 600 apps installed that it was a downgrade. But of course there was a new way of doing that, that actually is better. Wherever you are in your iOS-screens you can just put your finger on the screen, hold it down for a short time and drag it down. Voila! There’s spotlight.

The new fast access screen (that you access by dragging your finger from the bottom upwards) is also a highly appreciated function that should’ve been there years ago. 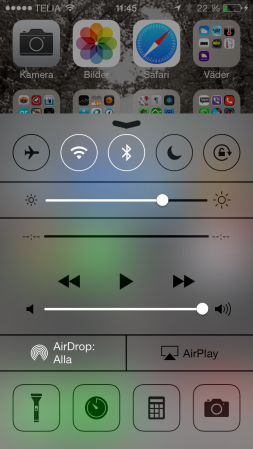 Siri seems to have had a major upgrade. A more personalized feeling and I think a better understanding of follow-up questions. It’s starting to be really impressing. 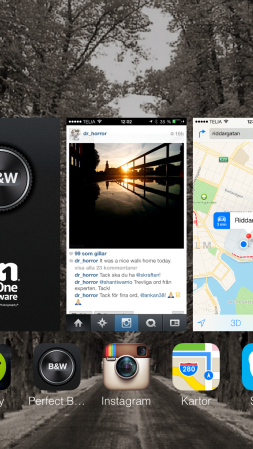 What is really nice in the new iOS is the multi tasking screen where you can reach all apps that currently are running. This screen is now a full screen with “live shots” from each and every app running. Great GUI!

What’s more to say? Well there are many many small changes here and there and I think this is a really good new iOS. I just wonder if it’s enough to keep the Androids behind.

I will continue to use iPhone since my whole home is built around it, AND it’s always working which I think is the number one feature with the iPhone. You just start it and use. No need to turn off GPS, no need for “app killers” since they are running out your batteries and so on. So Apple, I will stick with you for a while more, but I hope we will see some new cool, mind blowing functionality, in the future, as we were used to in the past.

This is a photo I took with my old iPhone 4S in Gothenburg last year. It’s also my current iPhone background. If you would like to use it, I’ll give it a way;  free to use. Just click on the image down below, and the source photo will be opened. Right click on the newly opened image, save image, and then it’s ready for import to your phone.

P.S If you haven’t seen the next layout for Apple iPhones / iPads (iOS) this is it’s lock screen D.S