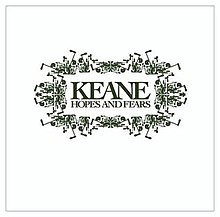 Number 1?! Yes. You haven’t missed number 2. The truth is, I can’t possibly separate this album and the next one. While this is an album that you may need one or two “listenings” to, the last one is one of those that get you struck’d by straight ahead. Both albums are still one of those that you can listen to for decades and still just enjoy the awesome production, the atmosphere, the small subtle changes, the vocals, the bass, the guitar, the drums and so on.

Keane achieved mainstream success with the release of their debut album, Hopes and Fears, in 2004. The album won multiple awards, including the Brit Award for Best British Album, and was the second best-selling British album of the year.

Keane are labeled as alternative rock, and I guess its hard to give them a better reference. With its typical piano / bass sound together with some amazing vocals, Keane is Keane. The more often used reference is Coldplay, and there the similarities are more obvious.

This album, Hopes and Fears has been a huge success.

In May 2008, both Hopes and Fears (number 13) and Under the Iron Sea (number 8) were voted by readers of Q magazine as among the best British albums ever, with Keane, The Beatles, Oasis and Radiohead the only artists having two albums in the top 20.

So lets dig into this amazing album

***** Somewhere Only We Know. The first track kicks of with some really characteristic Keane-sounds, and then after 0:24, the verse. This song is amazing. Also, listen for those subtle changes all the way up to 1:10. The bass that sometimes helps the piano, the steady increase in volume, and it accelerates all the way. This is Keane as its best. Working with changes in tempo, strength and feelings.

***** Bend & Break. The same kind of piano-groove as on Somewhere Only We Know kicks of the second track as well, and once again they are slowing things down, to be able to lift the track at 0:50, with a strong amazing chorus.

***** We Might As Well Be Stranger. A slow, subtle song with a steady rise to the crescendo after 2 minutes. Listen to the always present Keane piano, the variations in the vocals.

***** Everybody’s Changing. Once again, an awesome track. The difference between 1 and 2 may be the more heavy use of synthesizers in the verse. Look for the break at 2:47.

**** Your Eyes Open. A four!? A Simple four on the Best Album Of All Tracks. Well, its still a four, isn’t it? This may be weakest track on this album but still an amazing song. What is it that makes this song less good than the others. Well this is just personal. I have some difficulties with the start of the track. The groove isn’t that good, in my book. But hey, things are repaired once they got thing going and the chorus is great!

***** I’ve used the word subtle a number of times already and when I’m trying to describe one of the best groups in the world when it comes to variations musically the words soon starts to be running out. The track is built around the great vocals of Tom Chaplin and Richard Hughes drums. Beautiful.

***** Can’t Stop Now is a paring of traditional Brit-Pop and the Keanish sound. Just listen at the chorus at 0:53 with the vocals and the piano’s totally awesome harmonies.

**** Sunshine sounds a lot like Harry Nilsson. Have you heard him? The guy that almost was a “Beatle”. If you haven’t heard him. Check him out here.  Back to the song. The influences from Beatles are evident. The song is not as characteristic as many others on the album, but still a great track with some awesome harmonies.

****** This Is The Last Time. Another hit from this album, and No I didn’t miss out on the stars. This must be a six! The vocals starts of straight away with the piano, and later bass / drums. After 0:30 it starts to build, before the… aaaaamaaazing chorus. The harmonies, the piano, the drums, the bass. Just listen to it!! Perfect!

***** On A Day Like Today. A relaxed track, with slow changes and heavy use of Tom Chaplin’s voice.

***** Untitled 1. Drums kicks of this album, followed by almost an Abba-Sound on the keyboard (?). Nowadays great tracks are used in the gaming industry. This track could definitely be used as such. Great atmosphere, with strong characteristics.

To be honest, its not that easy to write a review around Keanes music. The all small great changes, the subtleness, the arrangements and so on. Its so good, and if every great move in the music would’ve been described it would take years.

3 thoughts on “Best Album Of All Times – Number 1”